The scientific studies with reference to the in vitro culture of animal cells and the growth factors were highly important in the process leading to the discovery of the Regenerating Agents®. In the 1950’s, the Nobel Prize Laureates Rita Levi-Montalcini and Stanley Cohen, isolated the Nerve Growth Factor and then the Epidermal Growth Factor.

A the late 70s, Denis Barritault was working on aging with Yves Courtois at the INSERM (Institut National de la Santé et la Recherce Médicale). He showed, in collaboration with Michel Pruniéras and Isabelle Saglier-Guedon, that extracts from the retina had proliferative effects on human skin cells in vitro. It was later on proven with Yves Pouliquen that the retina extracts also have re-epithelialization properties in the cornea. These studies led in 1979 to the deposition of the first patents concerning Denis Barritault’s discoveries. As other ocular tissues contained similar activities, the retinal extract was referred to as Eye Derived Growth Factor or EDGF. Denis Barritault made the first assumption of an ubiquitous growth factor in the Eye in 1981 [1]. Other tissues extracted with the same procedure showed similar growth factors properties.and eventually several groups using  heparin-affinity chromatography as a purification procedure identified the same molecule. The name FGF was finally adopted for this ubiquitous growth factor at first the meeting gathering all FGF world specialist in 1991 in San Diego.

In 1983, Denis Barritault became full professor at Paris 12 University in Creteil and created with Jean-Pierre Caruelle a new department focused on the understanding of cell growth and tissue repair and regeneration known at the CRRET laboratory (Croissance Cellulaire, Reparation Et Regeneration Tissulaires). This team grew rapidly to develop detection, quantification and purification techniques of FGF and focused on developing FGF as a skin healing agent, in order to improve the healing process and optimize the doses of FGF.

Conducting their studies in late 1980, the group quantified the endogenous FGF in a skin wound and observed that highly large quantities (billions folds) of exogenous FGF were required to induce a small speed advantage compared to normal wound healing, leading them to think that the added FGF was degraded. Based on this observation they focused their efforts on finding a way to protect the FGF from degradation. Heparin would have been a good candidate but the risk of bleeding associated with this molecule was too high.The search for a heparin mimic devoid of anticoagulant activity and that would have similar binding and protecting activities started. The obvious consequence of using this heparin mimic would lead to reducing the amount of added FGF required to speed up wound healing. For this purpose, they collaborated with nearby university chemists that had developed heparin-like polymer with reduced anticoagulant activity.

Some candidate polymers were selected as FGF protectors and were tested for wound healing in association with FGF. The unexpected result was to find in the control groups that a heparin-like polymer alone was sufficient to induce quicker and better wound healing than FGF alone or associated with the polymer! No additional FGF was needed. These experiments were repeated several times before Jean-Pierre Caruelle and Denis Barritault were convinced and could make the assumption that the ability of the heparin-like polymer to promote healing by itself may result from the protection of the endogenous FGF. They further assumed that it could also be the result of the protection of other cytokines and growth factors potentially present in the injured tissue and exhibiting high affinity to heparin.

From this initial assumption, a new vision for the organization of the cellular microenvironment and the role of heparan mimetic was suspected. First, the term heparan sulfate mimetic or analogues was preferred to heparin-like as inspired by the natural and ubiquitous heparan sulfate glycosaminoglycan devoid of significant anticoagulant activity. Second, it was postulated that heparan sulfate plays a central role in the regulation of tissue homeostasis, both as a scaffolding element of the extracellular matrix by bridging matrix proteins and as a protector and depot of most communication peptides such as growth factors and cytokines in the extracellular matrix compartment. If today this view is well accepted, it was not in the early 1990s. Third from this lead heparin-like molecule, Denis Barritault and Jean-Pierre Caruelle developed a series of in vitro and in vivo assays and synthesized many polymers with different chemical substitutions to optimize the ability of the heparan sulfate mimetic to perform tissue regeneration. This understanding of the polymer structure needed for regenerating tissue is the heart of the ReGeneraTing Agents technology or RGTA® and the start of a new branch of regenerative medicine known as RGTA®-based Matrix Therapy.

A highly convincing proof of concept came from the study showing bone regeneration by heparan mimetic in a bone defect model in an adult rat’s skull. It is well known that flat bones do not undergo repair and trephine holes of a certain size in an adult mammal never repair: the hole remains forever and neurosurgeons adjust metal plates or fill the defect with various cement but no natural bony scar tissue is formed by the original remaining bone. Hence this yes or no model called the Calvaria model is recognized as a gold standard to demonstrate “ex-nihilo” healing effect on bone tissue. In 1990s several growth factors such as FGF, BMP and TGFbeta were reported to stimulate bone growth that filled the hole. In collaboration with the team of Jean-Louis Saffar, from Paris V school of dentistry, Denis Barritault and Jean-Pierre Caruelle observed that when heparan sulfate mimetic alone was applied at the right dose and time after this acute lesion, not only was the hole filled within a month, the shape of the skull, the lamellar organization of the flat bone were also resumed (Figure 1). Moreover, when the defect was on both sides of the sagittal suture, a new suture was formed at the expected location in the new bone. All histological analysis performed could not make a difference between this new bone from original bone as if a regeneration process had occurred when the heparan mimetic alone was used [2, 3].

Another demonstration of the heparan mimetic effect was provided with Jean Gautron from the CRRET in a fast and a slow skeletal acute muscle injury adult rat model inducing ischemia, denervation and crush. In this model, fast muscle recovers naturally some function (60%) while slow muscles are transformed only in inert fibrotic tissue with absolute no function (0%) recovery (providing another yes or no model). After administration of heparan mimetic, fast muscle recovered almost 100% while slow muscle recovered 85% of the control lateral healthy muscle function (versus zero in the none treated). Heparan mimetic was able to induce muscle regeneration as shown at histology by muscle fibers organization, revascularisation and neuromuscular junctions with reformation of normal motor end plates and proper molecular weight forms of acetyl choline esterase [4,5]. These results were awarded with the INSERM – French Academy of Sciences prize in 1996 for the best publication of the academy proceedings (Figure 2).

These first results described above were obtained with a heparan mimetic containing benzylamine groups. This mimetic bore a major potential risk as benzylamine is a cancer promoting substance with no future for human uses. From 1995 to 1998, Denis Barritault and Jean-Pierre Caruelle made major progresses in designing and optimizing the heparan mimetic structures to improve tissue regeneration and minimize risks.

Altogether, these works led to the elaboration of the large functionalized polymers, and from that period on, the term RGTA® for ReGeneraTing Agent was coined, protected and preferred to heparan mimetic. A wide network of collaboration aiming to extend these observations from skin to other tissues had started. This led to the deposition of several patents related to the chemical structure, the regeneration process of all tissues that they documented in many models of tissue injuries including skin, mucosa, heart, muscles, vascular and nervous systems,  oral and digestive tract, bone, and tendons tissues.

In 2004 Denis Barritault became the first CEO of OTR3 and left the University as Emeritus professor and honorary director of the CRRET Laboratory.

The life of RGTA® in human health had started. 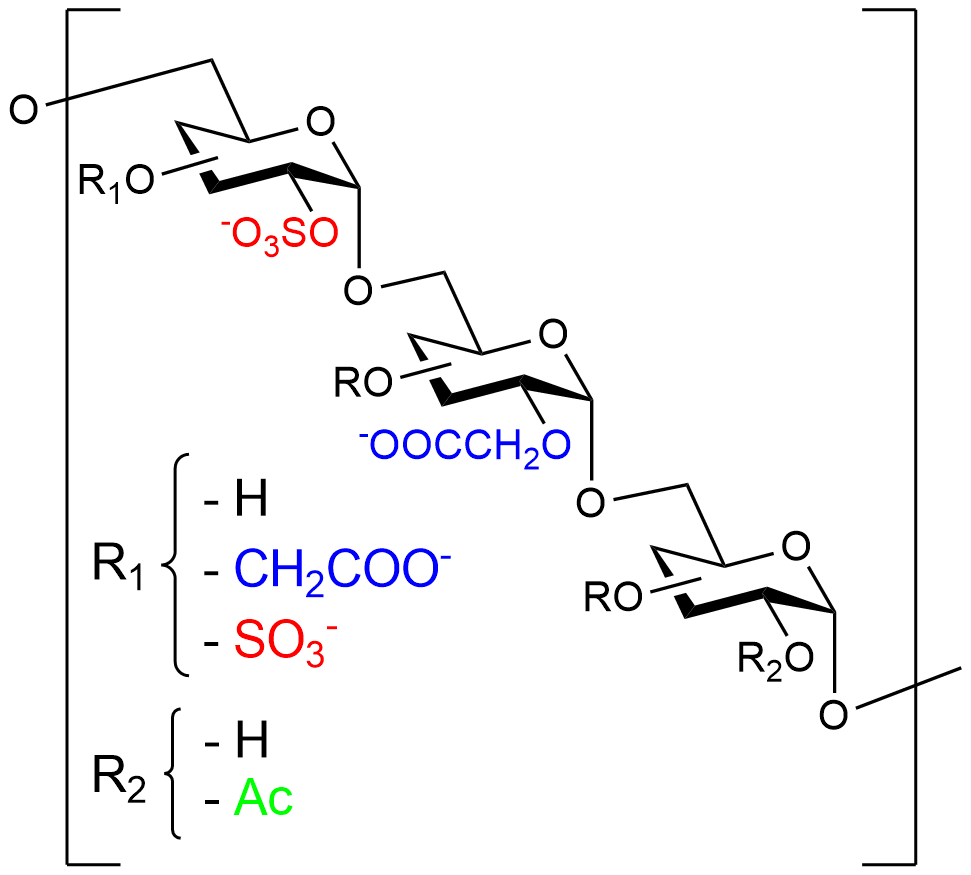 RGTA® are chemically engineered polymers constituted of dextran comprising roughly 250 sugar residues essentially modified with sulfate and carboxyl groups. Due to safety and accessibility, dextran is preferred to other substituted polysaccharides or copolymer backbones such as co-polylactic or malic acid, that could also constitute the RGTA® .

Mode of action of RGTA®

When a lesion occurs, the inflammatory state is triggered. This leads to the destruction of the ECM.

The healing process begins and the tissue repair process takes places as the inflammatory state is resolved. This results in a tissue with a compromized quality (scars, fibrosis…).

If the inflammatory state persists and the causes of the lesion remain, an endless cycle of desctruction and beginning of the healing process occurs resulting in tissue damage.

When added to the ECM compartment, RGTA® are resistant to degradation and they act like the natural heparan sulfate. Their addition allows to break the endless cycle responsible for the tissue damage in the case of a chronic lesion, and to avoid further ECM destruction in the case of an acute lesion.
Altogether, RGTA® restore the spacial organization of the cellular communication peptides  & the ECM microenvironment thus leading to tissue regeneration.

When introduced in the injured site, the RGTA® technology: